These Vegan Cinnamon Sugar Candied Walnuts are well-spiced and come together in just 10 minutes and only require 5 ingredients.

These candied walnuts are absolutely delicious and incredibly simple to make. I love to make them as a gift, or to have around as a snack. You can play around with the spices, but I love good old cinnamon.

Walnuts: This recipe calls for walnut halves. Pieces are too small and will be annoying to eat.

Water: To dissolve the sugar.

First, combine the water and sugar in a large stainless steel skillet.

Next, turn the heat to medium high, and stir occasionally until the mixture comes to a boil.

Then, allow the mixture to boil for 1 minute.

Now, add the walnuts, cinnamon and salt and stir to coat everything in the syrup.

Then, turn the heat off. Trust me! The sugar will not recrystallize if you keep the heat on. And, the nuts will burn.

Finally, keep stirring the walnuts until the sugar has recrystallized. This will just take a minute or two.

And thats it! The whole process takes about 10 minutes.

Why this Method Works

This method for candying nuts is my favorite method.

Making a syrup from the sugar and water dissolves the sugar.

Then, adding the walnuts in makes the sugar crystallize to the nuts.

This leaves you with super crunchy Vegan Cinnamon Sugar Candied Walnuts that are evenly coated in cinnamon sugar that really sticks to them.

Instead of walnuts, feel free to use any nut you like. Pecans would be delicious.

Instead of just cinnamon, add any warm spice to these walnuts.

Anything like a chai masala blend, pumpkin pie spice or apple pie spice will be absolutely delicious!

To store these Vegan Candied Walnuts, transfer them to an airtight container and leave them at room temperature for up to 2 weeks.

I do not recommend refrigerating or freezing. 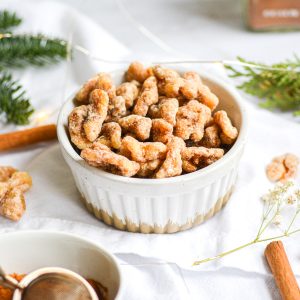