Cilantro Lime Red Cabbage Slaw is quick, easy, completely vegan and is the perfect slaw for tacos. Its adds brightness, freshness and flavor to any taco filling.

As soon as the weather warms up, all I want are tacos. I love them because tacos are so fast to make. And pretty much anything tastes good in a taco. I don't know how its possible, but its the truth.

Cilantro Lime Red Cabbage Slaw is so easy to make and its the perfect slaw for tacos and burrito bowls. It only requires a 5 ingredients and a few minutes to make.

Here is what you will need:

Red cabbage: I like to slice my own but you can also use store bought shredded cabbage.

Red Onion: this gives the slaw a ton of flavor.

Cilantro: Cilantro adds so much flavor, but if you don't like cilantro, you can leave it out.

Lime Juice: Lime juice adds brightness to this slaw. And it helps break down the cabbage making it easier to chew.

Salt: Salt seasons and also helps break the cabbage down.

This red cabbage slaw recipe is requires no cooking and is ready in 10 minutes.

To make it, combine all of the ingredients in a large bowl.

Then, massage the slaw with your hands. Squeeze your hands tightly. This action helps soften and break the cabbage down.

Then, the slaw will start to change color to a brighter purple. And thats when its done!

And thats it. Top your tacos and serve.

To store, place the slaw in an airtight container. Then, place in the refrigerator for up to 4 days.

Other than this vegan red cabbage slaw, top your tacos with with a sprinkle of finely chopped onion, slices of avocado or chopped tomato. Or if you're feeling ambitious make these recipes: 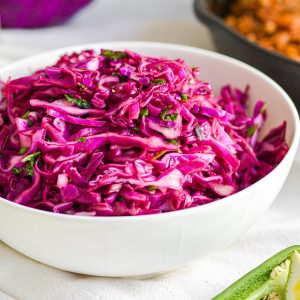