This Vegan Escarole and Bean Soup is an Italian classic. Its simple to make, filled with nourishing ingredients and pairs perfectly with a loaf of crusty bread.

I love soup season. Soups are incredibly versatile and easy to make. And who doesn't love a one-pot meal? Today I'm sharing my recipe for one of my all time favorite soups: Vegan Escarole and Bean Soup.

Celery: A couple ribs of celery.

Carrot: And to round out the mirepoix, a couple carrots also diced small.

Garlic: Adds the most delicious flavor.

Vegetable Stock: I like to use Better Than Boullion, but any vegetable stock is fine.

White Beans: You can use navy beans, cannellini beans or northern beans.

Escarole: Escarole is a bitter green that looks kind of like a head of lettuce. A whole pound of it goes into this Vegan Escarole and Bean Soup.

Can You Substitute Escarole?

If you can't find escarole, I think the best substitute is kale or chard if you like the taste of chard.

Chard has a more similar texture to escarole but a much earthier flavor.

Kale has a heartier texture but a more neutral flavor.

I don't recommend spinach for this Vegan Escarole and Bean Soup.

How to Store the Soup

This Vegan Escarole and Bean Soup makes 8 cups so you will probably have some leftovers. Divide the soup among some containers and store in the refrigerator for up to 4 days.

Or if you made this soup ahead of time as a freezer meal, divide it among containers and freeze for up to a month. This recipe freezes really nicely!
Looking for More Soup Recipes? 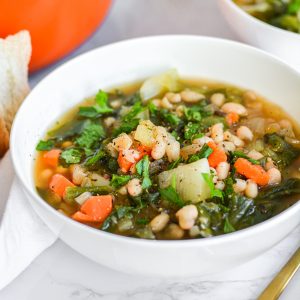 One Pound of escarole is about ½ of a large head OR 8 cups or chopped escarole, lightly packed. If you are going to use kale in place of escarole, chop it smaller as it is more hearty than escarole.
Keyword Vegan Bean and Escarole Soup, Vegan Escarole Soup

Let me know how you liked this recipe!