These Eggless Cinnamon Rolls are soft, full of cinnamon, and topped with a delicious vegan cream cheese frosting all while having absolutely no eggs in the recipe.

Cinnamon Rolls are a universally loved brunch treat. And these cinnamon rolls always get rave reviews from friends. They take some time, but the effort is worth it, I promise!

Ingredients for Making Vegan Cinnamon Rolls with No Eggs

To make this Vegan Cinnamon Roll recipe eggless, I simply increased the amount of fat and liquid in the recipe. Here is what you will need:

Non-Dairy Milk: I use So Delicious Coconut Milk in most baking, but any plain non-dairy milk will work here.

Sugar: Granulated sugar feeds the yeast and enriches the dough, making it softer.

Flour: Regular all purpose flour for these cinnamon rolls.

Yeast: To give the dough flavor and rise.

Salt: Salt gives the dough structure and balances the flavor.

Brown Sugar: Brown sugar is rolled up into the the dough and gives the cinnamon rolls a nice warm sweetness.

Cinnamon: They wouldn't be cinnamon rolls without a hefty dose of cinnamon!

The base of these Eggless Vegan Cinnamon Rolls is the yeasted dough. I like to think this dough is pretty fool-proof. Believe it our not, its pretty much the same dough as my Parker House Rolls. So, if you have made those, you're set! But, if this is your first yeasted dough, here are a couple of important things:

First, warm the milk to about 100* F. Yeast is a living organism and can be killed with too much heat.

You don't need a thermometer for this. Stick your (clean) finger into the milk, and if it feels close to your body temperature its good to go.

If it feels hot, allow it to cool for a bit before adding the yeast.

Second, you will notice that there is a range for the flour. I like to add 3 ½ cups into the dough first. Then, I add a bit more as I knead the dough.

Add just as much as you need to keep the dough from sticking to the counter top. In total I used 3 ¾ cups of flour.

I added instructions for same day baking and for next day baking. Since these Vegan Cinnamon Rolls take a while to make, I usually make them one day and bake them the next morning.

But, its up to you which you!

Cream cheese frosting is an absolute MUST for these Vegan Cinnamon Rolls. There are so many vegan cream cheeses on the market now a days.

Lately, my absolute favorite has been the Violife Just Like Cream Cheese Original flavor. If its unavailable to you, there is always the trusty Tofutti, but also Kite Hill and Daiya all make vegan cream cheese.

To make the Vegan Cream Cheese Frosting, simply combine the cream cheese with powdered sugar. Stir until well combined and no lumps remain.

Then, add vanilla and stir.

Finally, slowly add non dairy milk until the texture is smooth and spreadable. And thats it! Just spread it onto the Vegan Cinnamon Rolls and serve! 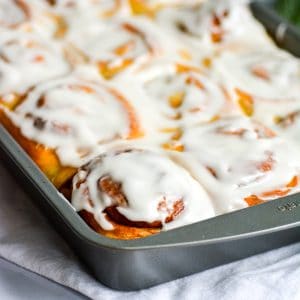 To Bake the Same Day

To Bake the Next Day