This Vegan Pear Crumble is single serving, indulgent enough for dessert, and nourishing to have for breakfast. And its absolutely delicious!

I have been so wrapped up in pumpkin season, that I put apples and pears on the back burner. But lest we forget about pears! They are sweet, floral and juicy and each variety has something special and different about it. They tend to be far sweeter when ripe than apples. And that makes pear a perfect choice for this single serve dessert (or breakfast!). Enter: Vegan Pear Crumble.

I love apples, but I think I love pears more. For years, I thought I didn't like pears at all. Honestly, I thought they were starchy, grainy apples that were lacking in flavor. But, then I learned that each variety of pear has a different way to tell if it is ripe. So, the Bartlett pears that I thought were flavorless were just under ripe. Alas, it was user error.

Once I started allowing my pears to ripen, I was a pear convert. Specifically Bartlett Pears, when ripe, have almost as much juice as a nice peach. And in a Fall fruit, thats incredibly unique. They have a sweet, floral flavor and thin skin making them perfect for snacking. That sweet floral flavor also makes them a perfect choice for a healthier dessert like this Vegan Pear Crumble.

I chose a Bartlett Pear for this Vegan Pear Crumble recipe, but Anjou or Bosc would be great, too! And these three varieties also happen to be the most accessible. So, use your favorite. But, make sure its ripe. This dessert heavily relies of the sweetness of the pear.

You only need SEVEN ingredients to make this Vegan Pear Crumble. Thats it! So lets go over them really quick.

Pear: We've just talked about the pear varieties that will work here. Just make sure its ripe!

Cinnamon: Pear and cinnamon go SO well together. You can also use a spice blend like a masala chai, or pumpkin pie spice in place of cinnamon. For cinnamon though, my favorite brand is Simply Organic.

Lemon Juice: a bit of lemon juice helps balance the flavors and brings out the sweetness of the pear.

Cornstarch: To thicken the filling. The pear juice will cook our of the pear and combine with the cornstarch to create a luscious sauce.

Oats: I love an oaty crumble topping and this one is simple and tasty. It makes this Vegan Pear Crumble. Do be sure to use old fashioned rolled oats.

Nut Butter: Any nut butter will work here. I used peanut butter but almond butter, cashew butter or even tahini will all be great!

This Vegan Pear Crumble is the perfect single serving Autumn dessert. It tastes indulgent with its cinnamon oat streusel and pear filling. But the sweetness of the pear is really able to carry this dish with just a touch of maple syrup added to it. 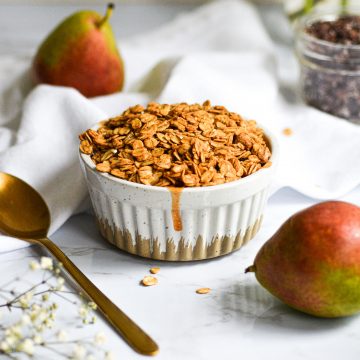 For the Pear Filling

For the Oat Topping