This Vegan Peanut Butter Frosting recipe is absolutely delicious and surprisingly dairy free! Its light, fluffy and perfect for frosting cakes or sandwiching between cookies.\

Its been a while since I've posted a new buttercream recipe. The truth is, once you have a vanilla and chocolate, you can really flavor them any way you like. You can transform vanilla into fruit buttercream by adding jam or freezedried fruit. Or into brown sugar buttercream by adding molasses. Or add a dash of orange blossom water or any other extract to spice it up.

So as you can see, once you have the basics down, you can branch off. But, I realized that once of my favorite flavors needed to be made into its very own buttercream. So here is my new favorite: Vegan Peanut Butter Frosting.

About this Peanut Butter Frosting

This buttercream is light and fluffy, which many peanut butter frosting aren't. Peanut Butter can be heavy and hard to whip air into. And it can especially be hard to maintain a smooth texture. But this recipe really nails it. This buttercream in sturdy enough to fill cakes while being light and smooth enough to pipe onto cupcakes.

The flavor of this buttercream is inspired by an old favorite snack: honey roasted peanuts. So sweet, so salty, so addictive. But, to keep this peanut butter frosting vegan and dairy free, I thought maple would make the perfect substitute for honey. And boy was I right.

The variety that doesn't require the occasional stir has a bunch of other ingredients in it which dilutes the peanut flavor. And we want all the peanut flavor we can get to come through. So, if you haven't yet, make the switch to the natural stuff.

For vegan butter I used Country Crock Plant Butter Sticks in the avocado oil variety. They taste great and work well for all the baking that I've used them for. Of course the old faithful Earth Balance Soy-Free Buttery Sticks work well here, too.

This Vegan Peanut Butter Frosting is great on vanilla and chocolate treats. I've used it to fill Chocolate Whoopie Pies, to pipe onto Vanilla Cupcakes and to frost a Peanut Butter Cake. 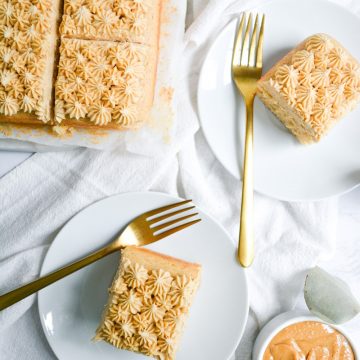 Let me know how you liked this recipe and what you frosted with it!