This Mini Vegan Poptarts recipe is super simple and absolutely delicious. For this vegan pop tarts recipe I combine flakey homemade pie dough with store bought jam and top them off with a simple glaze.

Baking is cathartic for me so I've been doing a lot of it. Sometimes I love a more involved multistep process like Vegan Cinnamon Rolls with Cream Cheese Frosting. Sometimes I want a one step item like Jumbo Double Chocolate Cookies or Peanut Butter Blondies. And sometimes I want something in between that is easy to make, but more interesting than a cookie. And for times like that, Mini Vegan Poptarts with Glaze are the perfect treat.

These Mini Vegan Poptarts are like mini homemade toaster strudel, but better! They're made of flakey and tender pie dough filled with store-bought jam with a simple glaze. They are simple to put together, and so delicious! And, they're a super cute brunch or dessert option- because everything is cuter when its mini.

Pie dough is one of those items that can be tricky to master. Its very few ingredients so technique really matters. There are many pie dough recipes out there that are made in a food processor or even in a mixer, but I prefer to mix by hand. You have much more control and are less likely to overwork the dough when mixing my hand. And for thia vegan pop tart recipe, good, tender, flakey pie dough is crucial!

I start by cubing the butter and placing it back into the refrigerator to chill. Cold butter is crucial for flakey pie crust for these Vegan Pop Tarts. And its also important to use a type of non-dairy butter that comes in stick form such as Earth Balance Buttery Sticks or Country Crock Plant Butter Sticks. Non-dairy butter that comes in stick form has a more firm texture than the stuff in the tubs that is formulated for easy spreading.

Tips for Flakey and Tender Dough Every Time

For the flakiest and most tender dough, I like to cut the butter into the flour with two forks, which act as a pastry cutter. So, if you have a pastry cutter, feel free to use that. The butter is cut in until its the size of small peas. Its important to have little pieces of butter because thats what makes the baked dough flakey and the Vegan Poptarts incredibly tender and just like homemade toaster strudel!

Then, a small drizzle of white vinegar which acts as an additional tenderizer. And finally ice water a tablespoon at a time tossing the dough with your hands until everything just sticks together, wrap it in plastic and let it chill in the refrigerator.

The chill time is also important for a tender pie crust. mixing the dough works the gluten in the flour, so its important to let it relax. Your patience will be rewarded with tender and flakey Mini Vegan Poptarts.

You can use any variety of jam you prefer in this vegan poptart recipe. I used store bought seedless blackberry jam by Trappist. These Mini Vegan Poptarts are delicious with any flavor, homemade or store bought. 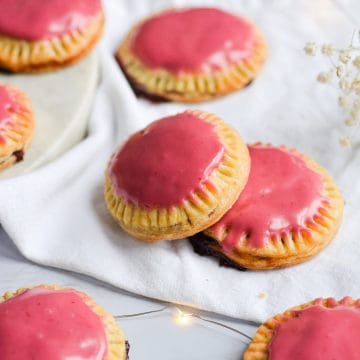 For the Pie Dough

To Put The Tartlets Together

To Make the Pie Dough

To Assemble the Tartlets